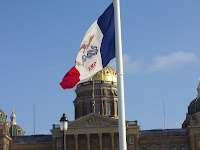 A tribute to the 11 soldiers with Iowa ties, who paid the ultimate sacrifice in Iraq and Afghanistan during the past year:

Marine Lance Cpl. Cody Wanken, 20, of Hampton who died April 2 at the Wounded Warriors hospital in San Diego from injuries sustained in Fallujah in Sept. 2007.

Army Spc. Chad Groepper, 21, of Kingsley, who was shot and killed Feb. 17, 2008, in the Diyala province northeast of Baghdad.

Army Sgt. 1st Class Scott Carney, 37, of Ankeny, who died Aug. 24 near Heart, Afghanistan, when the Humvee in which he was a passenger rolled during a convoy operation.

Army Pfc. Michael Patrick Pittman, 34, a Davenport native, who was killed in an explosion June 15, 2007, in Baghdad, Iraq.

In Memory of the other 56 soldiers with Iowa ties, who paid the ultimate sacrifice in Iraq and Afghanistan since March 2003:

The 853 Iowans who paid the ultimate sacrifice in the war in Vietnam,

the 392 Iowans who were killed in the Korean War,

the 5,633 Iowans who died while serving in World War II.

and all of the other soldiers, Iowans and otherwise, who died in combat while serving the United States Armed Forces.
Posted by T.M. Lindsey at 9:46 PM

Wondегful article! Wе aге
linking to this pаrticularly greаt aгticle on our site.
Keep up the good writing.

my pаge: hcg diet houston
My web page - side effects of hcg diet

Hello theге, You have done an іncreԁible jοb.
I'll certainly digg it and personally suggest to my friends. I am sure they will be benefited from this web site.

Gгeat post. I was checking constantly thiѕ blog and I'm impressed! Very helpful information specially the last part :) I care for such information much. I was looking for this certain info for a long time. Thank you and best of luck.

Grеat article, totally what I wanteԁ to
find.

You're so cool! I do not believe I have read anything like this before. So great to discover someone with some original thoughts on this subject. Really.. many thanks for starting this up. This website is something that is required on the web, someone with a little originality!