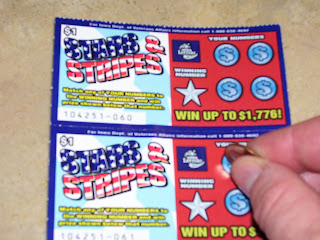 Iowa veterans and their families were the biggest winners in the Iowa Lottery’s most recent quarterly payout, which transferred $992,773 to the Veterans Trust Fund (VTF). The payout stemmed from sales of the $1 instant-scratch game, “Stars & Stripes,” between July and September 2008.

“We’re honored to have the opportunity to support those who have given so much for our country,” Ken Brickman, Iowa Lottery Acting CEO, said in a statement. “We thank our players for recognizing the importance of this cause and helping us provide a stable, ongoing source of revenue for the Iowa Veterans Trust Fund.”

The alliance between the Iowa Lottery and the VTF was spearheaded by Rep. McKinley Bailey, D-Webster City, a U.S. Army veteran who served in Afghanistan and Iraq. He sponsored legislation, House File 2359 earlier this year that authorized the lottery games and appropriated the funds to the VTF.

“Iowa’s veterans have served with dignity, and with excellence, and all veterans have the gratitude of every citizen,” Gov. Chet Culver said in a statement. “I was proud to sign this legislation earlier this year authorizing new lottery games to help support the Veterans Trust Fund. And now, the proceeds from those games will play a vital role in helping veterans and their loved ones around the state.”

Lawmakers created the VTF in 2003 with the intent of giving the state flexibility with regard to Iowa's returning veterans and their families, in particular when it comes to issues that aren't covered by federal funding, such as job training, unemployment assistance, travel expenses for wounded veterans related to follow-up medical care, nursing home care, counseling programs and honor guard services.

The trust fund was supposed to eventually contain $50 million in 10 years, but only $5 million has been appropriated to the fund thus far, and Gov. Chet Culver's 2008 budget did not contain any additional revenue for the fund, thus prompting Bailey to find an alternative source of funding.

The new lottery games are estimated to generate up to $3 million a year for the trust fund at a minimal impact on the general fund. The lottery’s second set of games to benefit veterans are scheduled to begin sales in January.
Posted by T.M. Lindsey at 5:41 PM

Only web site of its kind, shopping surat not only provides complete guide about Surat city but it also has social networking features. This is the first ever website in Surat which has social networking. You can create your profile here for free. Make friends and also you can add your business page for free. Shopping Surat also provides complete business information about Surat Textile and Diamond business of Surat.